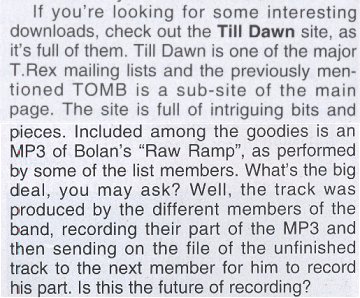 I’ve been refraining from doing a Marc Bolan Screen Gems article for some time. Partly because it’s something I’ve got a vested interest in. Plus I’m also in contact with several of the people who have created the websites. I’ve not wanted to upset anyone, either by saying dreadful things about their work or by excluding them from the article. In the end though, a man’s got do what a man’s got to do. So this month’s Screen Gems is all about Robbie Williams. No, on second thoughts, perhaps not.


One thing you learn very quickly while surfing is that there aren’t quite as many Marc Bolan websites as you would expect. Put that down to failure to conquer the USA. The Yahoo! search engine, generally reckoned to be the best on the web, is pretty poor. For a significantly more comprehensive listing of Bolan websites and Internet material, head for the TOMB (The Official Marc Bolan Resource Centre). It’s an almost definitive listing of what’s out there, and is updated on a regular basis, so you can be sure you won’t be chasing a load of dead links. The TOMB doesn’t quite include every site, so it’s also worth checking out The Bolan/T.Rex Webring.


Sadly, at the moment there’s no Bolan website as authoritative as those dedicated to other bands (the ‘Teenage Wildlife’ Bowie site springs to mind). However, there are a number of interesting smaller sites, specialising in particular fields. The closest to a fairly comprehensive site is probably Ivan Kocmarek’s Dancing In The Midnight, though it could equally be called By The Light Of A Magical Moon. On the whole, it’s an excellent site, with an interesting choice of Bolan related articles (including some obscure North American material), lyrics and very comprehensive discographies. I’ve got two minor gripes though. The discographies are now a little behind the times, though given the continuing stream of Bolan releases, that’s understandable. Secondly, the site’s a bit difficult to navigate around. Also worth checking out is The Groover. This is a new site, which at the moment it’s still very much in the development stages, but the potential is there. It currently houses the Spaceball Boots Bolan online bootleg reference.


So now we move on to the more specialist sites. S. Mottola’s T. Rex Australian Tour 1973 is based around the T. Rex gig in Melbourne on the band’s only Australian tour. Besides a couple of contemporary newspaper articles there are some excellent private photos taken from the audience. Donna La Folle (that’s ‘Mad Donna’ in English - don’t worry it’s a perfectly understandable T.Rex reference) is Pierre Champion’s page devoted to Bolan’s French career, taking in concerts, television and all sorts of other stuff. It includes some excellent research, following up the initial work of a highly respected author. It also in English and French, so you can get some education while browsing through it. The Boogie Man Cometh features an old article from a US rock fanzine, written at the time of Bolan’s only major headlining North American tour, in the early autumn of 1972. The article is now supplemented by some intelligent annotations by webmaster Robert.


Natalie McDonald’s Depth Charge is also worth checking out. Natalie worked as a publicist on T.Rex’s 1974 North American trek, which, no offence to Natalie, shows just what a state the T. Rex organisation was in at the time. She was still at school! Natalie was also responsible for what was probably the earliest T. Rex fanzine, Electric Warrior Free Press. You can read all about the history of the magazine as well, as well as other material on those far off days. The site also includes Bolan’s poetry book ‘The Warlock Of Love’. Other Bolan writings, this time from 1966, can be found at Rockmine Online and A Marc Bolan Information Page.


If you’re looking for some interesting downloads, check out the Till Dawn site, as it’s full of them. Till Dawn is one of the major T.Rex mailing lists and the previously mentioned TOMB is a sub-site of the main page. The site is full of intriguing bits and pieces. Included among the goodies is an MP3 of Bolan’s ‘Raw Ramp’ as performed by some of the list members. What’s the big deal, you may ask. Well, the track was produced by the different members of the ‘band’ recording their part of the MP3 and then sending on the file of the unfinished track to the next member for him to record his part. Is this the future of recording? Maybe bands will never have to get together all at the same time ever again, which would probably suit the Stones. Also great for downloads is Marc Bolan Net which is visually stunning, but be warned, you’re going to need an up to date browser with all the latest plug-ins if you want to enjoy the page in all its splendour. One of the aims of the T. Rex Action Group is to maintain the site around, and close to, the tree where Bolan’s fatal car crash occurred and where the Performing Rights Society memorial stone is sited. TAG were recently responsible for the CD release of the first Tyrannosaurus Rex performance at premier Kondon hippie club the Middle Earth. The site includes some interesting features and an excellent photo gallery with some unique photographs.


On the fanzine front, two publications are represented on the web. Firstly there’s the long running German fan club magazine The Slider. The site is in both German and English and it’s possible to download the complete contents of an issue. The magazine has long been known for it’s attractive professional appearance and this is carried through to the website. More recently, Rumblings, the journal of the UK based Marc Bolan Society has also gone online. The print version of the magazine is pretty much compulsory reading for Bolan fans.


So far I’ve refrained from mentioning The Official Marc Bolan Fan Club Website. Over the years the Official Fan Club has been a source of considerable division among Bolan fans. The club is now under new ownership. I’m going to reserve judgement on the website for the time being. The site is currently undergoing a huge makeover, so it may be better to check back in a couple of month’s time to see how things are developing.
One of the areas of concern was the way in which the post 1971 T.Rex master tapes were being treated and how certain aspects of Bolan’s recorded legacy were being handled. Since then the tapes have changed hands, more than once, with a sizeable cache ending up in the hands of Thunderwing, a company who’ve got off to a good start with their recent ‘Bump ‘n’ Grind’ CD.


Some people want to play T.Rex songs; others always wanted to be in T.Rex. Up till now there’s been a total lack of T.Rex guitar tabs on the Internet. Pierre Champion has taken it upon himself to change this situation and has set up Write Me A Song, which I’m sure the members of the excellent British tribute band T.Rextacy are eagerly checking out now so as to add a couple of numbers to their not inconsiderable repertoire. If they’re not, I’m sure American tribute band Futuristic Dragon are.
Of course, before Bolan formed Tyrannosaurus Rex, he’d had a brief career as a solo artist, followed by a short stint with John’s Children, recipient of the sobriquet “the worst band in the world” from their manager Simon Napier-Bell. Well, they weren’t and despite being largely a footnote, albeit an interesting one, in rock history, interest in the band has lingered on, as evidenced by the John’s Children Web Page and their section at the excellent mod site Making Time. Morrisey guitarist Boz Boorer also includes on his favourite band at Boz’s J.C. Page.


During his career Bolan had several important musical partnerships. The first was with Steve Took, a man who has been largely written off, uncharitably, as a Ladbroke Grove drug casualty. A fairer assessment would be that Took possessed a fragile talent that sadly never blossomed in the vicious rock arena. Steve Peregrin Took’s Domain remembers the man fondly. Took’s replacement was Mickey Finn. Well, Mickey’s still treading the boards with his own controversial T.Rex line up. For the majority of fans, to all intents and purposes Marc Bolan was T.Rex. No Marc, no T.Rex. Decide for yourself at Mickey Finn’s T.Rex. Finally, Tony Visconti, producer of most of Marc Bolan’s best recorded work has his own site where he talks about his work with Bolan, Bowie and other glam rock luminaries such as the Moody Blues.


Side Note:
Thanks to Cliff for his well rounded and all inclusive article - also this is the "original" writing of the article there have been some changes made in the issue through their editing staff (?) I never thought in the 8 years working on the internet helping to promote Marc's legacy that one daye I would see an article like this in a major magazine WE ALL have come a long way in our quest....to bring Marcs name & legacy to the forefront as well as try and build bridges among the various Bolan factions .

Copyright © 2002 The Till Dawn Organization. All Rights Reserved.